Since 1981, the Sustainable Communities – Tidy Towns Program has been rewarding and recognising projects around litter, waste management, recycling, heritage, community spirit and other environmental areas in towns both large and small across the breadth of NSW.

The event will be hosted by 2021 Sustainable Communities – Tidy Towns Award Winner, Singleton from Friday the 3rd of March 2023 to Sunday the 5th of March 2023 in Singleton.

The weekend will kick-off with registrations and a Welcome Function on the Friday evening with live music, local artisan stalls, and a hearty sit down meal to fuel us for the weekend ahead.

On Saturday morning you’ll be refreshed with tea, coffee and a light morning tea whilst being inspired by presentations and case studies from this years award entries. After a quick lunch you’ll be taken on one of four available tours and return with time to explore the historical and diverse offerings of Singleton. All of this in anticipation of the main event on Saturday evening where we will announce the winners for 2022 over a three course meal.

To cap it all off there will be a Farewell Breakfast on Sunday morning before we all return home motivated and inspired to work on more sustainable projects in time for the 2023 Sustainable Communities – Tidy Towns Awards.

For the full program, booking details, and tickets please click the links below.

Winning the title of the “State’s Tidiest Town” has become a much sought-after honour and is highly contested by small and large towns alike. View historical winners of Tidy Towns below.

All regional towns, councils, community groups, businesses, schools and individuals are invited to take part in this program by submitting an entry in one of the 14 categories or the Overall Award. There is no fee for entries to the awards.

The State Overall winner has the potential to become a finalist for the National Keep Australia Beautiful Award, and may also host the awards weekend for the year following their win. This is a great opportunity to showcase your town, but is not mandatory. If you are not in the position to host the awards, do not let it deter you from entering.

The 2022 Sustainable Communities Tidy Towns Awards will be co-hosted by Keep Australia Beautiful NSW and Singleton from the 3 – 5 March 2023.

To register to receive updates about the event as they become available please email events@kabnsw.org.au.

Previous participants have advised us of numerous social, environmental and economic benefits of entering into the program:

While projects may be ongoing, they must have recent significance with results shown over the past financial year. Previous overall and category award winners are welcome to enter again, but projects must have progressed from the previous entry, and those new achievements or outcomes must be demonstrated.

The Resource Recovery and Waste Management Award (sponsored by the NSW EPA) is for a project or program that tackles a range of waste and recycling problems through:

The Litter Prevention Award (sponsored by the NSW EPA) is for a project or program that reduces or prevents litter. This could include projects that use one or more of these approaches:

Projects should demonstrate inventive techniques that specifically address local litter issues, with quantifiable outcomes. Projects that
use more than one approach will be highly regarded. Projects can address any form of litter in any environment.

Previous or current Community Litter Grant applicants are encouraged to enter their projects.

The Habitat and Wildlife Conservation Award is for projects which create, restore and sustain biodiversity of our native flora and fauna in urban environments, creating wildlife corridors and encouraging habitat conservation, through:

The Heritage and Culture Award is for community projects that enhance and protect either our built heritage, natural heritage or indigenous cultural heritage.

The Young Legends Award is for an individual or groups of individuals (25 years and under who demonstrate outstanding commitment to their environment and show leadership in pursuing environmental outcomes in any of the preceding categories e.g. Litter, wildlife conservation waste minimisation etc., through:

Projects may be submitted by:

The Waterways & Marine Protection Award (incorporating Clean Beaches) is for programs and actions that create, restore and/or enhance our natural waterways and beaches, through:

The Communication & Engagement Award is for programs and projects that inspire environmental action, through:

The Recycled Organics Award is for projects and programs that reduce organics going to landfill and supports the community to avoid, reduce and recycle organics, through:

The Circular Economy Award is for any operationally viable projects in the circular economy which do, or could potentially, divert solid materials, fluids or energy from waste streams and return them to the productive economy.

The Renewable Energy Award is for programs and projects that progress achievements in developing products or services associated with renewable energy.

The Overall Award is awarded to a community in a town, village or regional centre that has successfully undertaken projects or actions in multiple areas of environmental sustainability and social inclusion across the range of award categories.

It is recommended that communities entering the overall award have a minimum of four (4) category entries.

Projects submitted by any organisation or individual (including schools) within the town, village or regional centre may contribute towards an Overall entry.

Communities that qualify will be assessed by an on-the-ground assessor who will visit projects in. Exact times and dates will be confirmed with each community before the assessor arrives.

As with the NSW overall winner, other achievements will be taken in consideration by the judges. 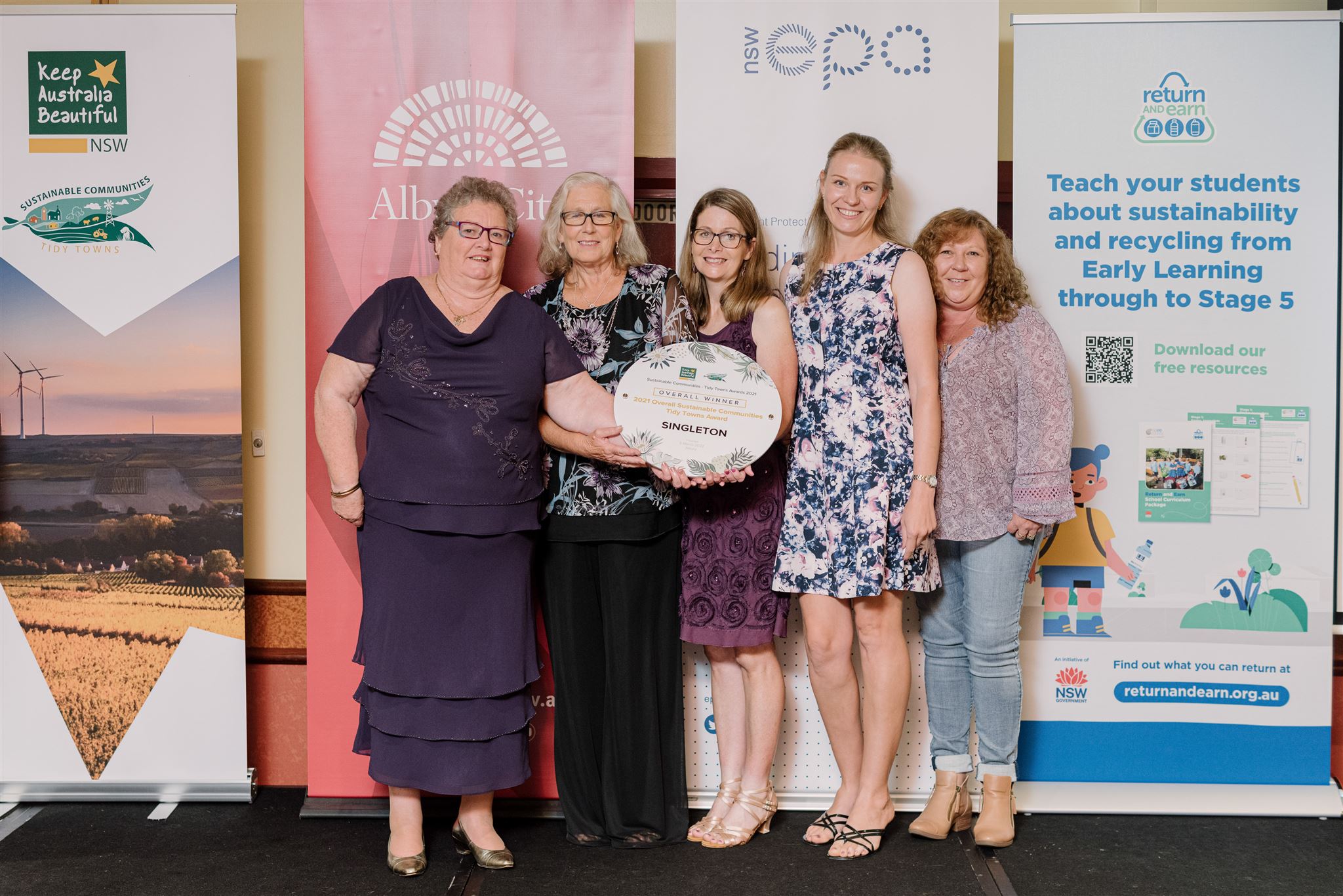 The town takes environmental sustainability seriously, which is demonstrated through high-calibre initiatives including the Singleton Waste Facility that recovers resources from 15 streams, diverting almost 2,000 tonnes of waste from landfill – an increase of more than 400 tonnes – in 2020/21.

Singleton residents’ care also extends to the surrounding natural environment through several projects that increase environmental awareness in the local community. The work carried out in Col Fisher Park, for example, was of a great importance. The area is an important riparian bushland area because of the rare and threatened River Red Gum trees, the rich biodiversity and connectivity with Nowlan Park, Robinson Reserve and a network of vegetated gullies.

Singleton has a particularly wide network of community organisations that communicate well, proving that they can work collaboratively for another’s cause.

The local Wonnarua people are the traditional owners of the Singleton area and are recognised, respected and celebrated through many cultural events. In 1999, The Wonnarua Nation Aboriginal Corporation was established to represent the Wonnarua people.

Through the Singleton Clontarf Academy, the Clontarf Foundation – although not well known – makes a big difference to the future of many young Aboriginal and Torres Strait Islander men by assisting them to complete school, develop strong community connections and pride, and prepare for employment.

Albury City is forthright in stating that it has a ‘two city, one community’ culture.

There is strong evidence of proactive engagement by Council with the community, and a comfortable willingness of the community to ‘have their say’ in decision making.

Community and political pressure to effectively manage the environment is increasing, and Council has achieved good results in these, often competing, arenas.

Murrurundi have consistently been strong in their environmental and social programs for many years. The stand-out project this year was their Doing it for the Farmers, a program to support their drought-stricken area. Our assessor gave special mention to the towns ability to work together during the extreme drought conditions and that much had been achieved with very little.

This year, Murrurundi won awards in the Environmental Communication Award with their ‘Hundred Mile Dinner’ and the Community Spirit and Inclusion Award for the ‘Doing it for the Farmers’.

Another small town that punches above its weight, showing that when everyone works together, much can be achieved. 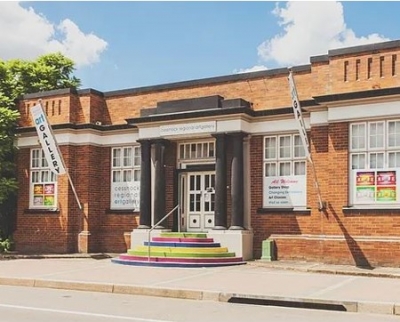 Cessnock has engaged with the community at many levels to make their region more liveable, attractive and productive. Practical examples include:

In the spirit of reconciliation Keep Australia Beautiful NSW acknowledges the Traditional Custodians of country throughout Australia and their connections to land, sea and community. We pay our respect to their elders past and present and extend that respect to all Aboriginal and Torres Strait Islander peoples today.